Plan a spring trip to see these iconic waterfalls. From the amber-colored Blackwater Falls in the northern part of the state to the sparkling blue waters of Campbell and Mash Fork falls at Camp Creek State Park in the south, West Virginia’s state parks are home to some of the Mountain State’s most iconic waterfalls. While waterfalls are beautiful at any time of year, early spring is prime “waterfalling” season, when most falls are rushing with snowmelt and rainfall.

So, plan a spring trip to see these inspiring wonders of nature with a friend or family member. Here’s four waterfalls you don’t want to miss!

Babcock State Park might be known for its iconic grist mill, but Glade Creek Falls is another highlight of this popular park. At a height of 15 feet, this stream-wide waterfall isn’t large compared to some of the others on this list, but the dramatic backdrop of the mill and a natural frame of surrounding foliage makes this waterfall alone worth the trip. As you’ll see, there’s a reason this spot is one of the most photographed places in West Virginia!

You can view this waterfall from the road on the mill side of the stream, but you’ll want to hike down into Glade Creek to get the best vantage point. Stop by for a few minutes and take a quick breather after a long hike, or stick around and let the sound of flowing water wash your stress away. Most people visit Blackwater Falls State Park to see its namesake waterfall, but any trip to the park should include a trek out to see the series of falls on Shays Run, more commonly called Elakala Falls. The first fall on the run, known as Elakala No. 1, is a popular destination for waterfall enthusiasts and requires light hiking on a trail from the park’s lodge.

After you spend some time at Elakala No. 1, hike down a little further to see the second fall. The path can be slippery and fallen trees have been known to block parts of the trail, but seeing Elakala No. 2 is worth the effort. There are two other falls on Shay’s Run, but they aren’t easily accessed. For a view of the entire run, head to the overlook at Pendleton Point and see the lower falls to the right of the lodge. Located in a narrow valley in the Mountain Lakes region, Holly River State Park is home to one of West Virginia’s most scenic waterfall systems. The Upper and Lower falls at Holly River are nestled in a cove full of rhododendron, evergreens and moss-covered rock, and lush with greenery even in wintertime. Both waterfalls are easily accessible by trail and provide several vantage points. In addition to these two gorgeous falls, you’ll want to check out Shupe’s Shute, which is a fast-flowing chute that dumps into a swimming hole.

The summit of Potato Knob is only a hike away and the worth the trek. After your hike, stop by the Holly River Restaurant for a bite to eat. Featured menu items include homemade bread, blackberry cobbler, lasagna, rhubarb pie and roast beef sandwiches. The restaurant has limited hours in the spring, so call 304-493-9493 for more details. 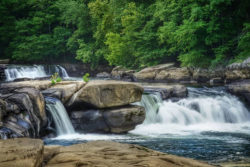 Each of the waterfalls on this list has a unique feature, but you can’t beat the river-wide falls and down-stream views you get at Valley Falls State Park. The park’s namesake waterfall, which tumbles along the dark, rushing waters of the Tygart Valley River, is the main attraction. But make sure you explore the park because there are other falls worth seeing. Don’t miss Twin Falls on Glady Creek, which features a rock formation that splits the waterfall into two streams. This waterfall is best seen during the spring or after rain.

As you explore Valley Falls, look for the remains of a sawmill and gristmill along the river. In the 19th century, the area was home to a thriving lumber community.