Greenbrier River Trail Back on Track after Historic Flooding

Like many parts of West Virginia, the Greenbrier River Trail (GRT) suffered severe damage in the June 2016 floods. However, as we know and experience first-hand every day at West Virginia State Parks:

West Virginians come together to rebuild and lend a helping hand in times of need.

That same can-do spirit rallied the local community, trail supporters and even visitors from other states to repair what was recently named one of “the most beautiful bike trails in the south” by The Culture Trip. 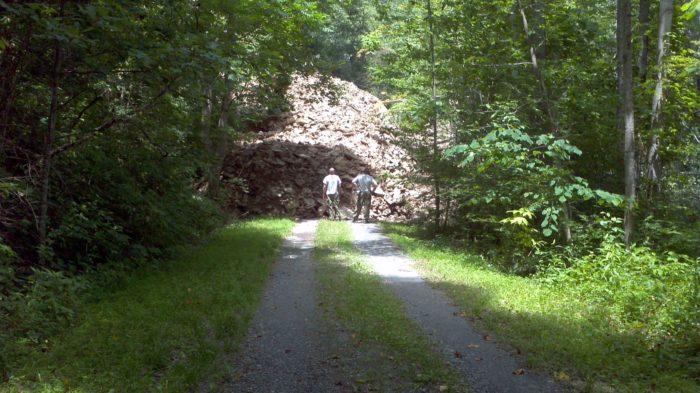 Within days after the waters receded, GRT crew began clearing away downed trees and debris. There were approximately seven major washouts along the trail, the worst being at Mile Post 13, where the slide deposited a 150-foot-tall pile of loose rock stretching 400 feet along the trail.

The Greenbrier River Trail Association, an organization of volunteers dedicated to maintaining the quality of the GRT, hosted a meeting to discuss flood repairs. Supporters came out in large-force to volunteer their time and talents, from directing traffic at interim parking lots to raising dedicated funds to restore the trail.

Help also came from our neighbors afar. The Kansas Department of Wildlife, Parks and Tourism sent a 10-person crew of volunteers. The crew, armed with their own tools, equipment and vehicles, spent a week helping to clear rocks and trees from a 3.5-mile section of the trail.

Over the past several weeks, GRT personnel and volunteers have made great progress. And to each and every volunteer:

Thank you for your hard work.

Although there is still work to do, most of the 78-mile scenic trail is usable and open to the public.