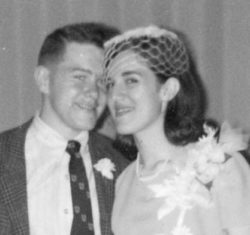 “One of the things we have been learning as we grow older is that miracles are normal! My wife, Mary, and I want to share a special little miracle with some of the folks who were part of it,” Houston resident Charley Green said about his anniversary trip to Blackwater Falls State Park.

Although they now live out of state, Charley and Mary both grew up in the Charleston area. They married on June 15, 1968 and spent their honeymoon week at Blackwater Falls. Both outdoor lovers, they had never been to the park and were enchanted by the park brochures they had seen.

“Our stay was wonderful and we have many, many great memories of it.  A few of them were recorded in photos that we snapped,” Charley said.

This year, to celebrate the couple’s 50th wedding anniversary, Charley booked a cabin at Blackwater Falls as a surprise for Mary. On the evening of June 15, the couple arrived at the park office to check in. As Mary joined Charley at the counter, the desk clerk started to hand them the key to Cabin 6, but then changed her mind and gave them the key to Cabin 22 instead. “I remembered that we had taken a picture in 1968 of Mary’s hands holding our cabin key, but it had been many years since we had seen that picture. We were pretty sure that the cabin was very near the one we had stayed in 50 years ago,” Charley said.

A couple of weeks later, the Greens were sharing some wedding photos with family and discovered they had a copy of that 1968 picture on the computer they were using.

“Sure enough, it was Cabin 22!” Charley wrote in his email to the park office. “I hope you will forgive us for thinking that Cabin 22 belongs to us! It is a special little gift from God.”

Charley and Mary thanked the staff at Blackwater Falls for being so helpful and treating them so kindly during their stay.

“They really helped our 50th anniversary become another lifelong memory.” The Greens anticipate creating many more memories at West Virginia State Parks and Forests in the coming years. The couple returns often to the Mountain State to vacation and visit friends and family.

“We both felt a strong identity as West Virginians, and still do. We always enjoyed being outdoors and often took advantage of the state and other parks when we could. Over the years we have probably visited most of the state parks and many of them more than a few times,” Charley said.

“We have often attended reunions and family picnics in one of the parks. Whenever this happens some of the folks take advantage of most of the different activities that are available. I think one of the most important things for us is simply sightseeing. Nature is so beautiful and so wonderful. We just try to enjoy it.”

Do you have a favorite memory from a West Virginia state park or forest? We’d love to hear about it! Share your stories and photos with us on Facebook and Instagram by tagging them #myWVStateParks. Click here to learn more about sharing your stories with us.